Trams around Australia and New Zealand 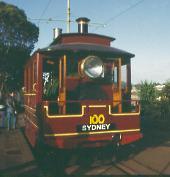 Tramway museums in Australia and New Zealand (Australasia) have their own association. Volunteers from the various museums exchange technical information, anecdotes, fellowship in good measure, tram parts – even, on occasion, entire trams (usually on loan). C.O.T.M.A. makes representations to government bodies and other agencies. Their website has a compact list of all member museums and describes the Association’s activities.
Pictured: perhaps the very spirit of COTMA – a Sydney steam tram, immaculately restored and operational in Auckland’s Museum of Transport and Technology.

A sector wide body encompassing our ‘heavy rail’ friends, to represent our common interests, much like COTMA but including all heritage and tourist rail in its many and varied forms.

With a 2 km line, this museum boasts almost all tram types used in Adelaide and the range of trolley buses. Adelaide was unusual in that it retained horse trams for a longer than usual period. One tramline remains in normal service on mainly reserved track to the beachside suburb of Glenelg.

Western Springs Tramway – part of the Museum of Transport and Technology (MOTAT).

Enjoying a high level of government support this Museum encompasses a wide range of transport modes, trams forming a key part with a service running from the Museum to the Zoo. Auckland boasted an extensive network of trams, much of which was replaced by trolleybuses for many years. See picture, above.

Both Ballarat and Bendigo were prosperous goldfields cities in the 1800s and electric trams were commenced by the power supply company. The Museum enjoys trackage over public streets and in the Botanical Gardens beside Lake Wendouree with a volunteer staff.

Bendigo’s heritage tram route is 4.2 km long and, using local streets, takes in significant gold mining attractions. The museum is part of a trust which tours display activities around the mine’s old workings. The tram service includes the famous “Bendigo Talking Tram” which has become an essential attraction for the city’s many tourists.

Brisbane once boasted an extensive network of tramlines and and an impressive fleet of trams plus some trolleybus routes. Of the Australasian cities to lose its trams, its system survived the longest.You can enjoy a look and a ride on some of this diverse collection in a bushland setting at Ferny Grove to the north of Brisbane.

This Museum is committed to preserving and operating Victoria’s tramway heritage including ephemera and technical items of historical interest.. It has a kilometre of operating track and a range of trams from Victorian systems. (Currently Bylands is not an operating museum. Check their web site).

The gracious city of Christchurch is fortunate in having a tourist tram service in its central streets, one of its tram being an air-conditioned, colonial style restaurant tram (restored at the Sydney Tramway Museum). You need to book – even for the breakfast sitting which begins at 7.30 a.m. This operation is not one of our usual all volunteer efforts: it’s a professional group.

The Christchurch tramway is currently closed following the earthquake of February 2011. There appears to have been only minor damage to infrastructure and the trams themselves were not affected. A date for reopening is dependent on the resolution of other issues in Christchurch’s city centre.

Christchurch does have an all volunteer tramway group. Christchurch’s entire electric system was scrapped. Not long afterwards.beginning with a remnant Kitson steam motor and a horse tram, restoration commenced. When work on electric trams began, bodies were recovered, but the electrics and mechanicals had to be garnered from everywhere. Today, at Ferrymead, you can ride an an electric, a steam hauled or horse powered tram and view some very early wooden bodied trolley buses.You can even hold your wedding reception there!. Currently Ferrymead is home to the Christchurch trams that got stranded in the street by the 2011 earthquake, the Christchurch depot being considered too dangerous to access.

With a huge “heritage” system so near at hand in Melbourne, it’s no surprise that an enthusiastic preservation movement exists nearby. The Association does not run regular rides, but they will welcome your attention and a visit. Details are on their part of the Railpage website. They have also been of tremendous help in recent and earlier times in assisting us at the Sydney Tramway Museum with our locating vital tramway components.

Tasmania was the only Australian state to operate double deck trams on a fleet basis. One is proudly on display along with two single deck cars. Sourcing its power from Tasmania’s hydro electric supply, Hobart’s extensive trolley bus system survived much longer – two examples are on view. Rides, here are on the Society’s trains. Australia’s island state is the only one to have lost regular passenger trains, hence an understandable emphasis on railway operation. 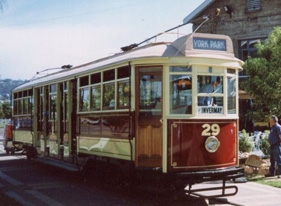 Like its state capital, listed above, Launceston enjoyed a tram network with 26 single truck trams, until late in its tram era when three handsome bogie cars, like 29, were built. The last of these was recovered and restored early in the life of a small Society. They are open every Saturday, now have some trackage, an excellent historical display and are working on some of the earlier single truck fleet.

The Melbourne Tram Museum @ Hawthorn Depot is open to visitors on the second and fourth Saturday of every month (except for December, when it is only open on the second Saturday). Opening hours are 11am to 5pm. Admission is by gold coin donation.

The operators of Melbourne’s tram system.

Perth’s tramway museum represents the three tramway systems of that state, Perth, its port city, Fremantle and large mining city, Kalgoorlie. A remote mining town, Leonora, proudly displays its own tram. Perth’s museum is the key feature of Whiteman Park in the upper Swan Valley. An interesting layout is home to a growing and beautifully restored fleet. The website is particularly informative.

Portland is situated along the coast road between Melbourne and Adelaide. A cable tram provides a sightseeing tour of the local attractions. A most innovative website! This is the museum which is home to Sydney’s Sydney Steam Motor 103A which, just recently, has been successfully restored following a disastrous fire at its former home in Parramatta Park some years ago. This has been a magnificent achievement. Valley Heights is the Blue Mountains Division of the NSW Rail Transport Museum.and preserves depot buildings and the rail heritage of the Blue Mountains.

Truly a flash-back to times past, especially relevant to South Australian as Adelaide once boasted a system of horse drawn trams of short routes. Visitors can experience a Clydesdale powered double deck heritage tram conveying them across the causeway to Granite Island.

Wellington’s unique urban geography has ensured that public transport has remained a strong force – unique these days in New Zealand. Its narrow streets and winding roads saw even narrower trams clambering over hills and disappearing into exclusive reserved tunnels. It is through Wellington’s museum at Queen Elizabeth Park on the Kapiti Coast that we can experience its trams, riding two kilometres from McKay’s Crossing to the Whareroa Beach Picnic area. Visitors can also see various trams, including one of the earlier cable trams and a magnificent photographic display which captures the golden age when trams ruled in Wellington.

‘The Largest Trolley Museum in the Pacific Northwest’. The OERM has Sydney O class 1187 in its operating fleet, where it’s reported to be a popular car.

‘Founded in 1939, the Seashore Trolley Museum has grown into the largest electric railway museum in the world with a collection representing almost every major American city that had a streetcar system.’ This museum is of interest to us Sydney siders as Seashore is home to the only other operating Sydney P class tram car, 1700

Until recently known as the Sydney Bus and Truck Museum, this body works very closely with the Sydney Tram Museum and there is a significant overlapping membership. After a period of uncertainty over its former Tempe site, the museum was relocated to the former Leichhardt tram depot next to a new and enlarged STA Leichhardt bus depot. The museum is currently not open to the public while the members work hard to get their new museum ready for visitors. See their web site for updates.

While primarily a Victorian Railways site, VigSig’s infrastructure and rolling stock databases covers ALL railway rolling stock, heavy, light or otherwise that operates or has operated in Victoria. If you want to know about Victorian tramcars, past and present, VicSig is the place to look. Also contains route maps, depot layouts and safe working instructions.

Though not a tramway organisation, AMRA has affiliations with the Museum and many common members.