What are trams exactly? 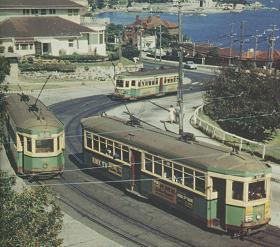 Trams run on rails, often along streets, to carry a large number of people. Where trains are usually high off the ground, trams are usually much lower so that people can step on to them from the street.

Why were trams introduced?

Sydney’s large system began before motor cars. Houses had been small and packed closely so that people could walk to work and to shops. Beginning in 1879 people liked the new trams, even although these early ones were pulled by little steam motors. Soon, there were many lines and as these spread out, new homes were built further from the city.

By 1900, most trams were electric and had become the main means of travel around Sydney. At the weekends, families rode them to visit beaches, picnic grounds and friends.

Even after cars appeared, in the 1920s, trams were busy and crowded. Most people could travel by tram either right in to the city, or to a railway or a ferry wharf.

In 1932, the Sydney Harbour Bridge opened with four railway lines, two were used for trains and two for trams. There were just two surprisingly wide lanes for cars.

What happened to the trams?

By the 1950s, increased numbers of cars on the roads caused motorists to blame the trams for traffic jams. They called for the replacement of trams by buses. Many tram passengers disagreed with this, but governments listened to the car drivers and in 1961, the once huge tram system was closed.

The traffic jams continued. More cars blocked the roads. Bus travel at busy times often took longer than the trams they had replaced!

Can we see these trams anywhere at all ?

People can still ride the trams which once carried Sydney people. They run each Wednesday and Sunday and every day for the last fortnight in school holidays when school students bring their families!

What happened in other cities?

Melbourne kept its trams and continued to expand and renew its network, becoming the largest tramway network in the world. Adelaide retained its line to Glenelg and in recent years, has begun re-establishing former lines once removed, by extending tram services further into the CBD, with possible other extensions in the future mooted. Newcastle, Perth, Hobart and Brisbane, all generally followed the same path Sydney did, with their tramway systems closing in the 1950’s and 60’s.

Sydney returned to trams in 1997, with the opening of a modern light rail line from Central to Wentworth Park. Its popularity saw extensions to Lilyfield in 2000, and Dulwich Hill in 2014. Another line from Circular Quay out to Randwick opened in late 2019, with another branch to Kingsford opening in early 2020. Newcastle likewise, saw a return of trams in early 2019, with a modern line running from the Newcastle Interchange Rail Terminal, to Newcastle Beach. Parramatta will see trams reintroduced in 2023, with a line running from Westmead Hospital to Carlingford. In addition, cities such as Canberra and the Gold Coast have been introducing brand new systems not based on former tramway legacies, to great success. Internationally, over eighty cities around the world have been opening new tramlines in recent years. Athens for example, opened three very modern tram routes for their Olympic Games in 2004.