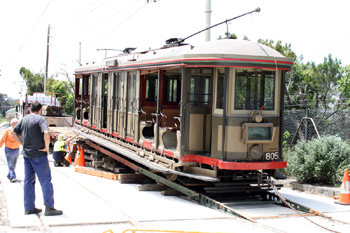 After some uncertainty as to whether it would be possible for the PowerHouse Museum to lend their pre-World War I toastrack to our Museum, the 1909 built cross bench tram finally arrived at the Museum. Conveniently, on the one quiet day time of our Summer Holiday Programme, the morning following Australia Day. Once a busload of Western Australians had departed, Australian Train Movers commenced the slow reversal towards our demountable tramway ramp. Workshop crew waited with anticipation, Traffic members,awaiting their next customers, found it the perfect time for a fascinating break for morning coffee. 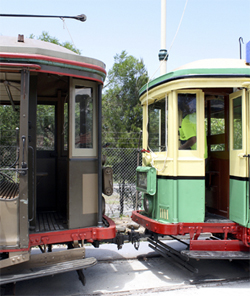 805 descends the ramp, controlled from the rear by the semi-trailer’s winch, the front chain attached to the coupler slowly moving away until gravity has played its part. Power is shut off for the operation, spell-bound visitors, waiting a fair distance back declaring that they’d picked the very best day to see this bonus spectacle.

“What took you so long?” the glistening, newly painted O 1111, resplendid in its post 1933 green and cream livery and a former stablemate at both Manly and North Sydney Depots seems to ask the new arrival. It was well over fifty years since they’d last met. In no time at all the resident O car gently towed its older relative over brand new track to Depot Junction. 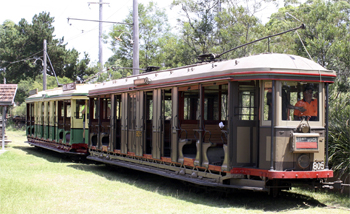 The situation was then reversed. The older car then took the lead down a very gentle slope towards the workshop, gravity providing the momentum. A slow process, the 1111’s brakes kept the speed to a minimum from behind, drivers in 805 signalling that all was clear. Of course there was no shortage of Museum staff supervisors all watching for the slightest problem. There was none! Soon, the car was on the traverser, the cars were uncoupled. With the help of a modestly powered forklift and some convenient padding, O 805 was softly nudged into a prepared workshop space. In the following weeks, the car would be thoroughly examined and given every attention before becoming a celebratory exhibit at the Vintage Tramway Festival on 26th and 27th February.